Abstract.
The most interesting place in the world from a religious perspective is not the Middle East, but rather Silicon Valley. That is where the new religions of the twenty-first centuryare being created. Particularly important is the Data Religion, which promises humans all the traditional religious prizes – happiness, peace, prosperity, and even eternal life – but here on earth with the help of data-processing technology, rather than after death with the help of supernatural beings.
Data Religion believes that the entire universe is a flow of data, that organisms are algorithms, and that humanity's cosmic vocation is to create an all-encompassing data-processing system – and then merge into it. On the practical level Dataists believe that given enough biometric data and enough computing power, you could create an external algorithm that will understand us humans much better than we understand ourselves. Once this happens, authority will shift from humans to algorithms and humanist practices such as democratic elections and free markets will become as obsolete as rain dances and flint knives.

Biography
Prof. Yuval Noah Harari is the author of the international bestseller Sapiens: A Brief History of Humankind. He was born in Haifa, Israel, in 1976. He received his Ph.D. from the University of Oxford in 2002, and is now a lecturer at the Department of History, the Hebrew University of Jerusalem.

He specialized in World History, medieval history and military history. His current research focuses on macro-historical questions: What is the relation between history and biology? What is the essential difference between Homo sapiens and other animals? Is there justice in history? Does history have a direction? Did people become happier as history unfolded?

Prof. Harari also teaches a MOOC (Massive Open Online Course) titled A Brief History of Humankind. More than 80,000 students from throughout the world have participated in the first run of the course in 2013. The second run began in August 2014, and in its first three weeks 30,000 students joined it.

Prof. Harari twice won the Polonsky Prize for Creativity and Originality, in 2009 and 2012. In 2011 he won the Society for Military History’s Moncado Award for outstanding articles in military history. In
2012 he was elected to the Young Israeli Academy of Sciences. 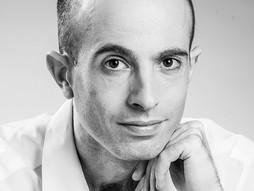 Share
See our other events
See all events
Public lecture
CSER Public Lecture: Matthew Adler "Measuring Social Welfare, with Priority for the Worse Off"
23 May 2022
See all news