On Wednesday 15th December, CSER and the University of Tokyo will host a joint panel titled 'Resilience and Global Risks'.

Resilience to global risks is a shared concern for both Japan and the UK. In July 2021, the UK Government published a Call for Evidence to help formulate a new National Resilience Strategy. Japan issued a Fundamental Plan for National Resilience in 2018 while the Sendai Framework for Disaster Risk Reduction 2015-2030 identified resilience as a priority. In this session, researchers from the Universities of Cambridge and Tokyo will present on submissions to the UK National Resilience Strategy and Japan’s responses to COVID-19 and the Fukushima nuclear accident. 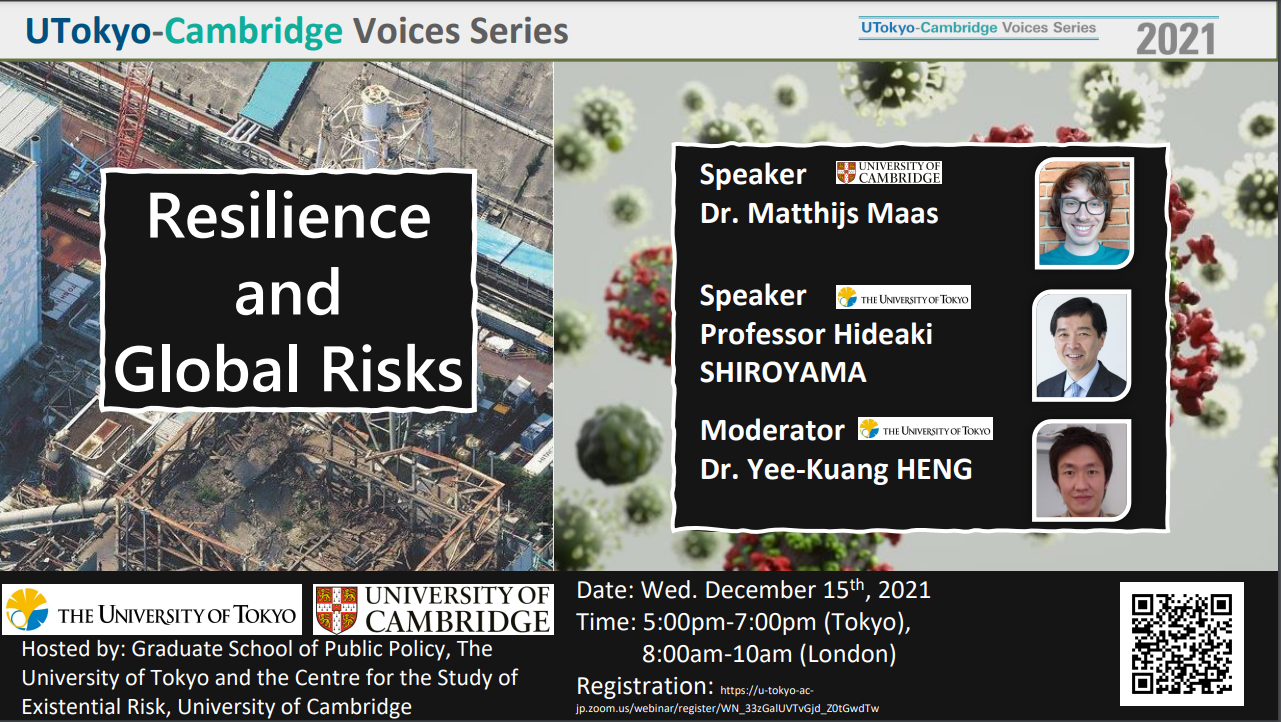 Professor at the Graduate School of Public Policy and Graduate Schools for Law and Politics, The University of Tokyo Hideaki SHIROYAMA is a Professor of Public Administration at the Institute for Future Initiatives (Director), the Policy Alternatives Research Institute (Ex-Director), the Graduate School of Public Policy (the former Dean), and the Graduate Schools for Law and Politics, The University of Tokyo. His research focuses on
international administration, science, technology and public policy, and public policy process. His publications include Transformation of Political Space and Policy Innovation 1 Political Theory of Policy Innovation (University of Tokyo Press, 2008), The Structure of International Aid Administration (University of Tokyo Press, 2007), Governance of Science and Technology (Toshindo, 2007),“The Harmonization of Automobile Environmental Standards between Japan, the United States and Europe” in Pacific Review vol. 20-3, “Administrative Reorganization and Public Sector Reform in Japan” in The Public Sector in Transition: East Asia and the European Union Compared (Nomos, 2007), “Technology Innovation and Diffusion for Environmental Protection,” in Energy Market Restructuring and the Environment (The University Press of America, 2002).

Professor at the Graduate School of Public Policy, The University of Tokyo Yee-Kuang HENG is Professor at the Graduate School of Public Policy, University of Tokyo. He graduated from the London School of Economics and Political Science (LSE) with a B.Sc. (First Class Honours) and subsequently PhD in International Relations funded by the UK Overseas Research Student Award Scheme. He previously held faculty positions lecturing at Trinity College Dublin, Ireland; the University of St Andrews in Scotland, United Kingdom; and the Lee Kuan Yew School of Public Policy, National University of Singapore. Yee Kuang’s research interests lie at the intersection between risk, Security Studies and International Relations. Besides peer-reviewed articles in journals such as Security Dialogue, his most recent book is Managing Global Risks in the Urban Age: Singapore and the making of a Global City (Routledge, 2016). Currently, he is a member of research projects funded by the Japan Society for the Promotion of
Science (JSPS), working on national risk assessments of existential risks such as climate change and AI. He is also Expert Affiliate at the Lloyds Register Foundation Institute for the Public Understanding of Risk.

Matthijs is a Postdoctoral Research Associate at the Centre for the Study of Existential Risk, University of Cambridge. He works on adaptive global governance approaches for extreme technological risks, with a particular focus on regimes for high-stakes or destabilizing uses of AI technology, such as in military contexts. His other research interests are on the effects of AI technology on international law itself, as well as conceptual frameworks for the regulation of uncertain risks from emerging technology. Matthijs has a PhD in Law from the University of Copenhagen, and a MSc in International Relations from the University of Edinburgh. He has previous experience working at The Hague Centre for Strategic Studies and the Dutch Embassy in Beirut, amongst others. Dr Maas was recently selected as one of the Santander-CIDOB ‘35 under 35’ List, acknowledging the work of 35 young researchers on AI governance.