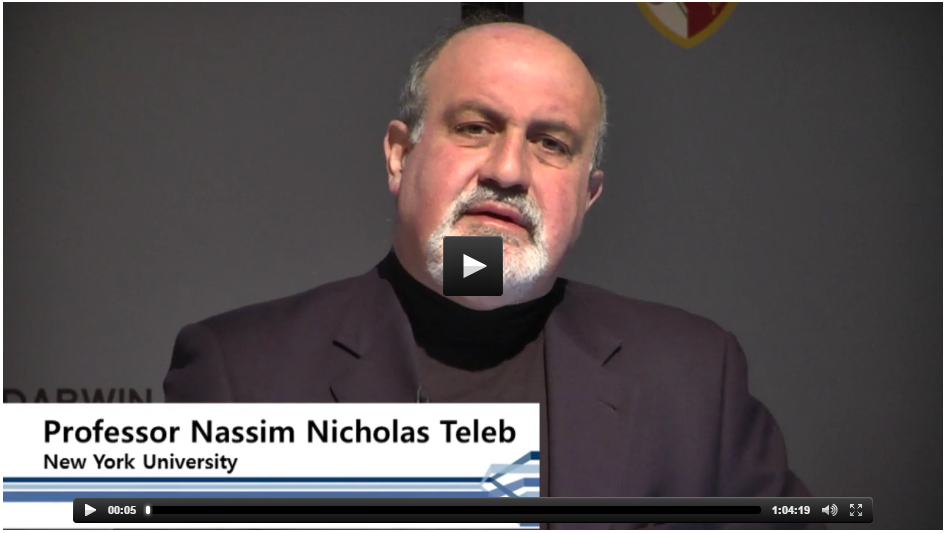 On Friday 20 January, Professor Nassim Nicholas Taleb gave a talk on “Extreme Events and How to Live with Them” the second of the popular Darwin Lecture Series, which this year is co-convened by CSER Research Associate Julius Weitzdoerfer. Professor Taleb is the author of a multivolume essay, the Incerto (The Black Swan, Fooled by Randomness, and Antifragile) covering broad facets of uncertainty.

The talk can be viewed on the Darwin College Lectures website. In his talk, Professor Taleb said: “I am honoured to be in Cambridge… Cambridge has Wittgenstein, but it also has Martin Rees, who has a Centre on Existential Risk. And we are going to discuss the properties of events that can lead to these existential risks”.

Professor Nassim Nicholas Taleb, the famous author of The Black Swan, gave a talk for this year’s Darwin College Lecture series’ on the Extreme. The theme and the speaker gathered a huge audience, with more than fifty people waiting outside the lecture theater before the doors opened. An hour later, when Taleb came in, Lady Mitchell’s Hall and two overflow theaters were packed and ready to listen to “The Logic and Statistics of Extremes.”

The talk started with Taleb describing the countries of Mediocristan and Extremistan. In Mediocristan, we can find events that can be properly described by their average and standard deviation. Extreme events are incredibly unlikely. An example would be human height. Most people are close to the mean and it is very unlikely or impossible to find extreme outliers, i.e. people who are 3 meters or 50 centimeters high.

In Extremistan, however, events are not accurately described by the mean and single events can have disproportionate impact. Here we are dealing with fat-tailed distributions, meaning that the probability of extreme events is a lot more likely than usual. For example, the deadliest diseases can kill thousand or millions of times more than usual, the richest people can be millions of times wealthier than the average and best-selling books will sell millions of copies while the average book with a major publisher will sell ten thousand.

As we can see, the events that belong to these two classes are extremely different and problems come, says Taleb, when we use the methods and intuitions we have about Mediocristan and apply them to Extremistan. Usual methods like sampling or extrapolating from previous evidence go out of the window since the effect of single events can’t be covered by these models and it will heavily dominate over any other effects. This is the Black Swan problem.

Taleb continued that talk by attacking financial experts. He explained how a lot of the problems with the most recent financial crisis can be explained because traders are using models that belong to Mediocristan and suffering from Black Swans as a consequence. As an example he brought up how some experts had claimed that the causes leading to the last crisis were 10 sigma events and some even claimed several 25 sigma events. To give an example of what this means, if you won the lottery 15 times in a row and got hit by an asteroid on the way back home it would still not be as unlikely as a 25-sigma event. And 10-sigma events should happen only once every ten thousand years and we’re supposed to have seen several of them in the last thirty years. These extreme implausibilities start to pile up and suggest that our models are very likely wrong.

In the last part of the lecture Taleb mentioned another problem of standard economic analysis, non-ergodicity or how statistics are done by averaging over groups but seldom from the perspective of a single person making choices over time. This can lead to very different results and it supports Taleb’s next point. A defense of the precautionary principle, his point essentially being that since we only have one Earth and we are dealing with events that can have extreme outcomes we should be extraordinarily careful. One single miss can send us towards irreparable ruin so there are some risks that we simply should not take. He mentioned Lord Martin Rees and his institute in Cambridge, the Centre for Study of Existential Risk (CSER) praising their work as one of the most important things we can do to make sure that we can sustain humanity into the future.

The next lectures are: