Research Associate Lara Mani has been awarded as a Runner-up in the University of Cambridge Vice-Chancellor's Research Impact and Engagement Awards in the Collaboration category for her project with the Seismic Research Centre at The University of the West Indies (UWI-SRC).

In August 2021, the research team supported by in-country partners and community leaders undertook a large data collection campaign in St. Vincent. Over the course of three weeks, the team surveyed and interviewed over 600 residents to establish the efficacy of the crisis communications campaign. The results helped shape a crisis communication strategy for UWI-SRC for use in future volcanic crises in the Caribbean region. The project also created a film of community testimonials from the eruption "Vincy Voices: Lessons from La Soufriere". Findings from the evaluations are due to be published in a Geological Society of London Special Edition on the St. Vincent eruption later this year.

Lara says “This project was designed very much as a knowledge exchange project. It was never about having someone come in from the outside, do the research and leave. From Day One this has been about building up the skills and capacity of UWI-SRC to conduct their own evaluations in the future, and making sure we were able to build their confidence using a real-time example”.

Project Co-PI from UWI-SRC, Stacey Edwards says “ With this project we were able to gain valuable insight into the strengths and weaknesses of our crisis communications, obtaining practical information that can be used to inform future communications on other volcanic islands. Through a deeply collaborative process and a series of workshops, we learned how to conduct our own monitoring and evaluation systems which speaks to the impact and sustainability of this project. In addition to building capacity at UWI SRC, the project also provided us with tangible products – a communications strategy, experiential film, and participatory animation – that will be incorporated in our outreach programme.”

“We’re both absolutely elated to be recognised for this collaboration as part of the Vice-Chancellor’s Research Impact and Engagement Awards, and look forward to continued partnerships between UWI-SRC and CSER” says Lara. 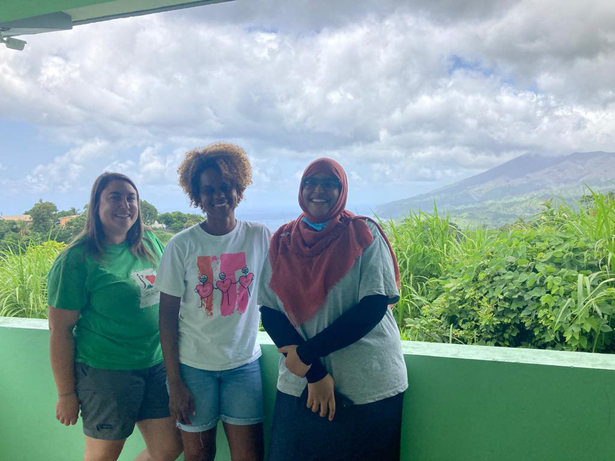