The Malicious Use of Artificial Intelligence: Forecasting, Prevention, and Mitigation 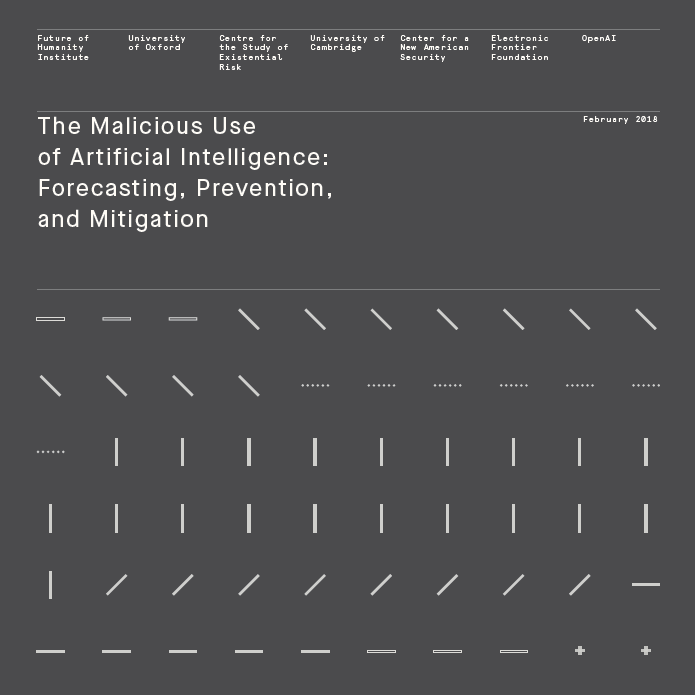 26 experts on the security implications of emerging technologies have jointly authored a ground-breaking report – sounding the alarm about the potential malicious use of artificial intelligence (AI) by rogue states, criminals, and terrorists.

Forecasting rapid growth in cybercrime and the misuse of drones during the next decade – as well as an unprecedented rise in the use of ‘bots’ to manipulate everything from elections to the news agenda and social media – the report is a clarion call for governments and corporations worldwide to address the clear and present danger inherent in the myriad applications of AI.

However, the report – The Malicious Use of Artificial Intelligence: Forecasting, Prevention, and Mitigation – also recommends interventions to mitigate the threats posed by the malicious use of AI:

The co-authors come from a wide range of organisations and disciplines, including Oxford University’s Future of Humanity Institute; Cambridge University’s Centre for the Study of Existential Risk; OpenAI, a leading non-profit AI research company; the Electronic Frontier Foundation, an international non-profit digital rights group; the Center for a New American Security, a US-based bipartisan national security think-tank; and other organizations.

The 100-page report identifies three security domains (digital, physical, and political security) as particularly relevant to the malicious use of AI. It suggests that AI will disrupt the trade-off between scale and efficiency and allow large-scale, finely-targeted and highly-efficient attacks.

Likewise, the proliferation of drones and cyber-physical systems will allow attackers to deploy or repurpose such systems for harmful ends, such as crashing fleets of autonomous vehicles, turning commercial drones into face-targeting missiles or holding critical infrastructure to ransom. The rise of autonomous weapons systems on the battlefield risk the loss of meaningful human control and present tempting targets for attack.

In the political sphere, detailed analytics, targeted propaganda, and cheap, highly-believable fake videos present powerful tools for manipulating public opinion on previously unimaginable scales. The ability to aggregate, analyse and act on citizen’s information at scale using AI could enable new levels of surveillance, invasions of privacy and threaten to radically shift the power between individuals, corporations and states.

To mitigate such risks, the authors explore several interventions to reduce threats associated with AI misuse. They include rethinking cyber-security, exploring different models of openness in information sharing, promoting a culture of responsibility, and seeking both institutional and technological solutions to tip the balance in favour of those defending against attacks.

The report also ‘games’ several scenarios where AI might be maliciously used as examples of the potential threats we may face in the coming decade.

While the design and use of dangerous AI systems by malicious actors has been highlighted in high-profile settings (e.g. the US Congress and White House separately), the intersection of AI and misuse writ large has not yet been analysed comprehensively – until now.

Dr Seán Ó hÉigeartaigh, Executive Director of Cambridge University’s Centre for the Study of Existential Risk and one of the co-authors, said:

“Artificial intelligence is a game changer and this report has imagined what the world could look like in the next five to ten years.

“We live in a world that could become fraught with day-to-day hazards from the misuse of AI and we need to take ownership of the problems – because the risks are real. There are choices that we need to make now, and our report is a call-to-action for governments, institutions and individuals across the globe.

“For many decades hype outstripped fact in terms of AI and machine learning. No longer. This report looks at the practices that just don’t work anymore – and suggests broad approaches that might help: for example, how to design software and hardware to make it less hackable – and what type of laws and international regulations might work in tandem with this.”

“AI will alter the landscape of risk for citizens, organisations and states – whether it’s criminals training machines to hack or ‘phish’ at human levels of performance or privacy-eliminating surveillance, profiling and repression – the full range of impacts on security is vast.

“It is often the case that AI systems don’t merely reach human levels of performance but significantly surpass it. It is troubling, but necessary, to consider the implications of superhuman hacking, surveillance, persuasion, and physical target identification, as well as AI capabilities that are subhuman but nevertheless much more scalable than human labour.”

The Malicious Use of Artificial Intelligence: Forecasting, Prevention, and Mitigation is available to download and read at www.maliciousaireport.com or on arXiv.