As part of the University of Cambridge’s Borysiewicz Interdisciplinary Fellowships programme CSER researchers SJ Beard and Clarissa Rios Rojas have been working with Lorena Escuadero (a Turing Fellow and Senior Research Associate at the Department for Radiology) and Xiaolei Zhang (a researcher at the European Bioinformatics Institute) to develop new narratives around global catastrophic risk.

They have delivered workshops and received training and mentorship in creative writing and theatre and have produced a range of outputs including poetry, stories, plays, comics, and a pitch for a radio programme as well as putting on a joint performance.

Below is a selection of their early outputs that were presented at a meeting of the Science Policy Interface for Global Catastrophic and Existential Risk in October 2022. A further selection of their work will be featured as part of the 2023 Cambridge festival.

Yet, while I would not dare
presume to know
the mysteries
of mighty Apollo
I think perhaps I’ve come to understand
a little more about this famous tale

You see, there still remain
some of us who claim
to practise foresight
Yet, when done well
this should not be misunderstood
as an ability
literally
to see into the future.
Rather, our practise is about
bringing together the many varied
visions of this present
So much of which we do not know
And using those to clarify
what is going on right now
and all the many ways this might turn out 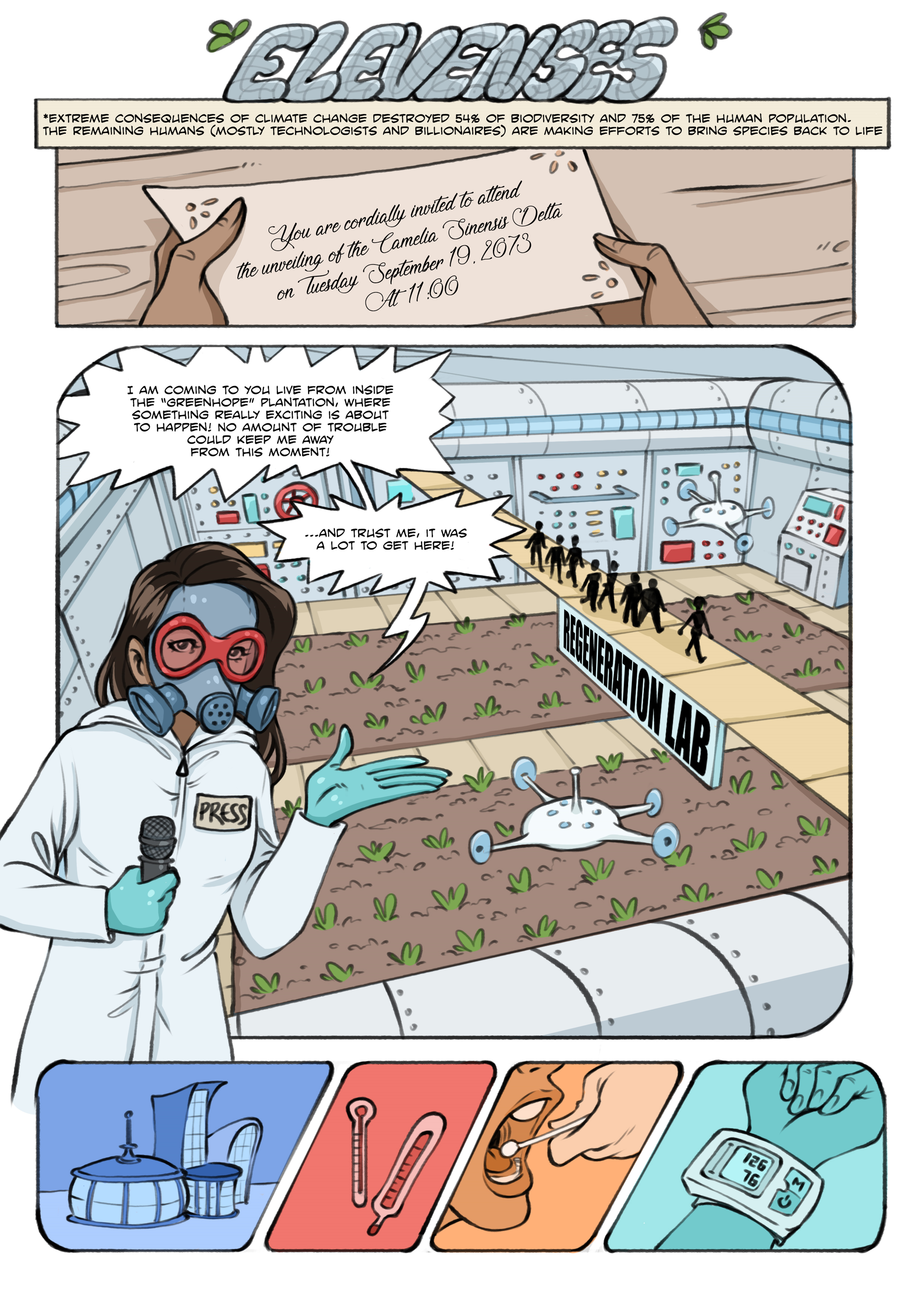 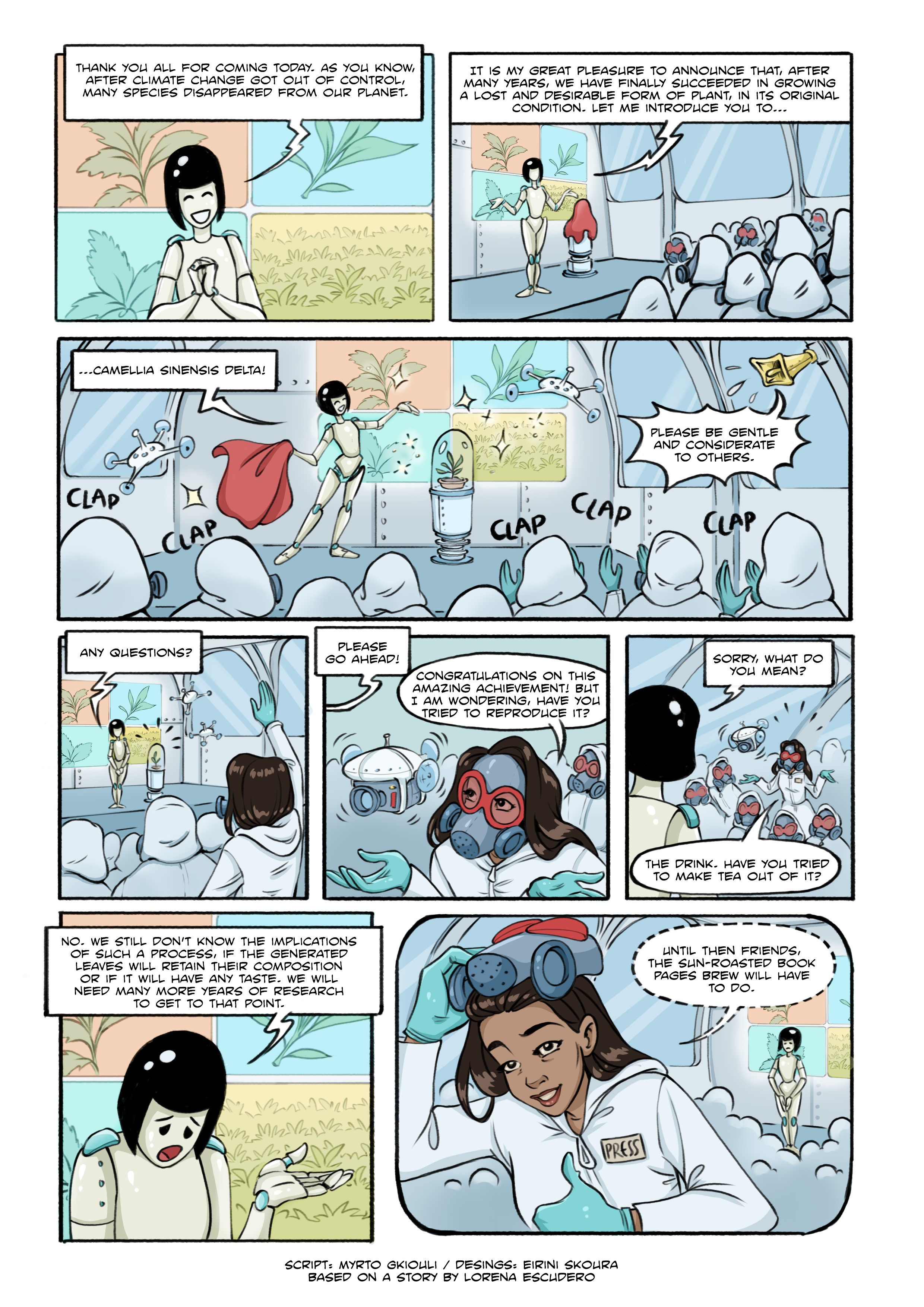 “Person number 12 please”. Before walking to the counter, I skimmed through the checklist page again, holding the whole folder tight with a deep breath.

“What’s your name?” This time I am talking with a new visa officer.

"I am Wei. This is my application form”.

“Why do you want to apply for the visa”?

“I am a full-time employer in the US. I want to renew my visa to return to the US”. She started typing.

“I am a biomedical scientist employed by the biotech company Moderna. You could find proof of employment from HR”.

“What do you do in biomedical science?”

“I develop computer programs to design mRNA vaccines.” It must be able to impress her.

“Do you have a CV?” I quickly found my CV and handed it to her.

“Are you or have you been a member of the communist party?”

“No”. I never put such an experience in my CV.

“Have you been a member of the communist youth league?”1

“Yes, when I was in middle school like everyone else does. I have no longer been a member.” I have put this answer just like my rehearsal - concise and firm.

“Have you studied in any university in China?”

“Yes, I did my bachelor's degree at Beihang University2. I studied biology and it is nothing related to the military". Expecting she would check without asking, I made a blunt statement this time. Suddenly she fastened her typing, I also need to finish my sentence quickly.

“I have a PhD degree from Yale. I have studied and worked in the US for more than 10 years...” While I gazed at her and tried to predict her immediate response, she stopped typing and nodded at me.

“Thank you!” That stopped me from talking. She made an excuse and left the counter. What a familiar scene exactly like last time, my heart suddenly sinks.

“I am sorry. We cannot issue your visa.” Expectedly walking out with another piece of rejection paper, I found myself a seat on the other side of the road and wanted to read it, looking at the masked crowd passing by and rainbow flags flying outside the embassy.

1 Nearly every student in China would be a member of the communist youth league and everyone would be in without thinking. It's also considered as an honour. Now if a Chinese citizen wants to cross the US broader, this question becomes too obvious to answer, as obvious as "Have you committed a crime before? “.

2 The US government issues a list of the Chinese universities to ban, which is considered involved with the research projects in the Chinese military. I use one on the list as an example. There are many reports indicating that the denial of visa is firmly based on the name of the university itself and subjects (a form of “discrimination”) without inspecting individually.

But you too may
On screens
Have seen it happen many times
The world destroyed
By aliens or asteroids
Rogue AI, even sometimes climate change
Although not of a kind that is familiar
To climate scientists

Yet that desire
To see these things for yourself
Is part of what always makes them look the same
Some explosive force arrives
Out of the blue
And lays us all to waste
Just as when the Mesopotamians
First thought that angry gods
Might kill them with a flood
And how that had already happened once
With only a few, virtuous and wise
Humans surviving in an ark
You know that story too

It scares me
Because in many ways
The endings we should fear the most
Are not like that, cannot be seen
Take many forms, as slow
Creeping disintegrations
Of the systems we rely on
Becoming inexorable
Irreversible
And out of our control
And none of us
Should count on seeing
The world end
More than
Once 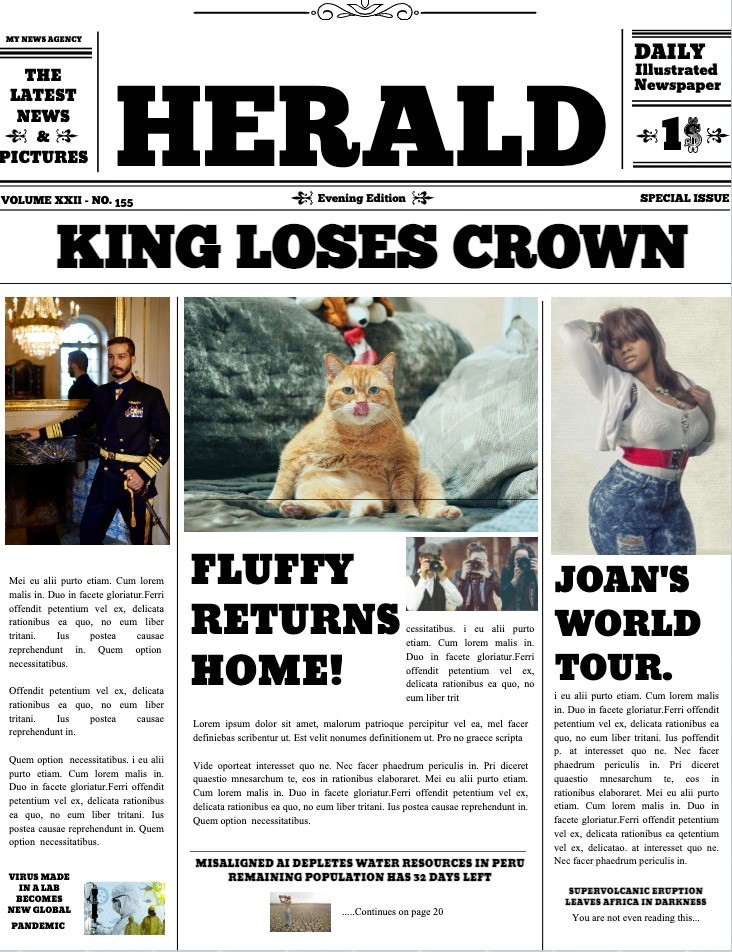 The plantation is vast, covering several levels underground. It is equipped with the most cutting-edge technologies, surveillance and security measures. We have to wear white protection overalls, latex gloves, face masks. Further checks on our temperature, viral and bacterial load, blood pressure and oxygen levels are taken before entrance can be granted. Any safety procedure isn’t too much to protect what this place is creating.

I am covering the discovery for The Elevenses. There are other mediums here as well, mostly from news networks like ours. But this is a hot one for us. Our information cloud system takes the name from that daily break, started three centuries ago as an excuse to ingest a few biscuits, swilled down with a hot drink. We fund part of this research programme. This will be our next stream cover for sure. It will be featured in every home through our 3D hologram devices. Shame I will have to appear wearing this overall.

"Thank you all for coming today,” the spokesperson is a hybrid, human conscience and robotic body, female. “It is my great pleasure to announce that we have succeeded in growing a lost and desirable form of plant. As you know, after climate change got out of control, many species disappeared from our planet, including the Camellia sinensis. We have attempted to bring it back to life in its original condition for many years, and we have finally achieved it. Let me introduce you to Camellia sinensis delta.”

\A helper unveils a glass bell jar next to the stage. The photographers’ drones jostle for position to get a shot of the green leaves.

“Please be gentle and considerate to others.” This means behave or you will be out. They chose an English conscience to match the event.

Then we watch the projection of a video on their 3D system, with headphone-less sound and automatic adjustment of language and accent. It shows images of tea across history. Drawings of bushes grown in ancient China. Black and white recordings of tea rooms. Plantations in Akratik, formerly known as India. The lost Ceylon before drowning. Families enjoying their elevenses with the dark drink as if it was the most natural thing in the world. The popular love of tea as it has always been described to us, but never experienced by us.

A round of applause.

I raise my hand and I am given the green light with a nod.

“AM63-7L8, covering for The Elevenses. Congratulations on this amazing achievement. But I am wondering, have you tried to reproduce it?”

“The drink. Have you tried to make tea out of it?”

“No. We still don’t know the implications of such a process, if the generated leaves will retain their composition or if it will have any taste. That is a very challenging question, we will need many more years of research to get to that point.”

They move on to the next question.

To the followers of The Elevenses I will have to say that there is hope, but that in the years to come they will have to keep drinking their brew made out of soaked sun-roasted book pages.

Once, in school assembly
Our chaplain talked about St Augustine
He told us how he lived
During a time of great upheaval
Because the Roman Empire was collapsing
And, unironically,
I thought how interesting it must be
To live through such a time

In fact, the fall of Rome
Was rather slow
It took centuries, or longer
The final kings
Who claimed that their authority
Descended from the Caesars, fell
Only after world war one
So, while this period saw many upheavals
It is likely that at the time
It felt rather less interesting
Than we think of it in hindsight
Indeed, many of those who lived through it
likely saw themselves
As just carrying on, as people always had
Clear that the real catastrophe
Was happening somewhere else

Could it be the same with us?
Not knowing
If our age
Is interesting
Or just another stage
In the gradual transition
Of the past into the future.
And if it is, what will future generations
Make of our decline?
Might they argue, just as we do
Over whether it was caused
By corrupt power
Or rising superstition
Or will they have forgotten
All about us and our petty struggles?
Or will they even come to be at all?

For me the most interesting thing
About living, right now,
Is the not knowing